Some pictures
There were 22 rides (one of which was a pub evening). These pictures illustrate a few of them. The ride numbers relate to the rides programme. This report provides statistics and recommendations for 2015.

A lovely, if windy, day. The launch took place at Blackpill. Nick Guy(Wheelrights Chairman) introduced councillor Nick Davies, Byron Davies AM (Shadow Minister of Transport) and 'Badger' of the Wave who all said a few words before launching the Festival. This launch was colourful as 'Brunel' (aka David Judd Wheelrights President) was there together with a number dressed 1920'style for the Tweed Family Ride. The first pic. shows them. 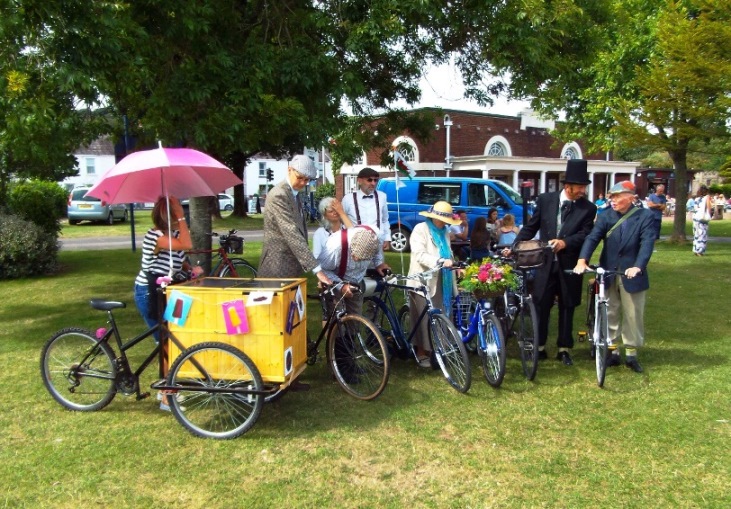 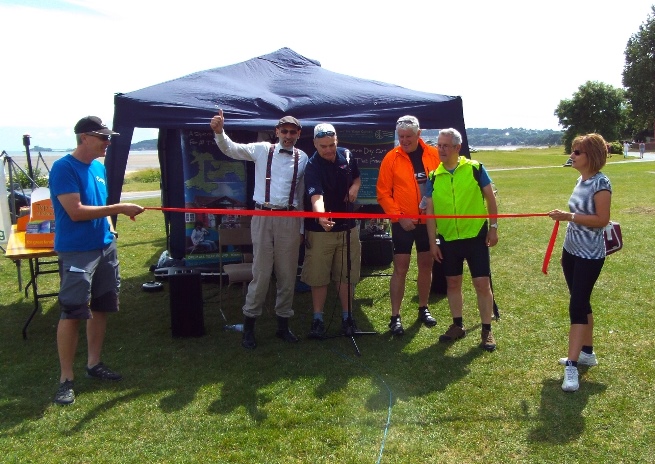 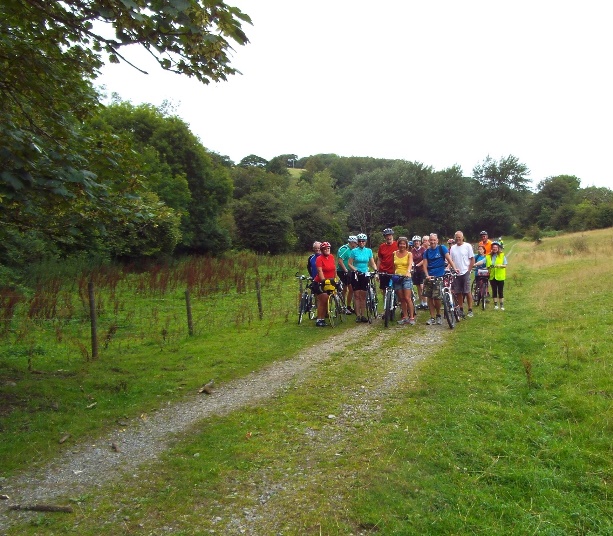 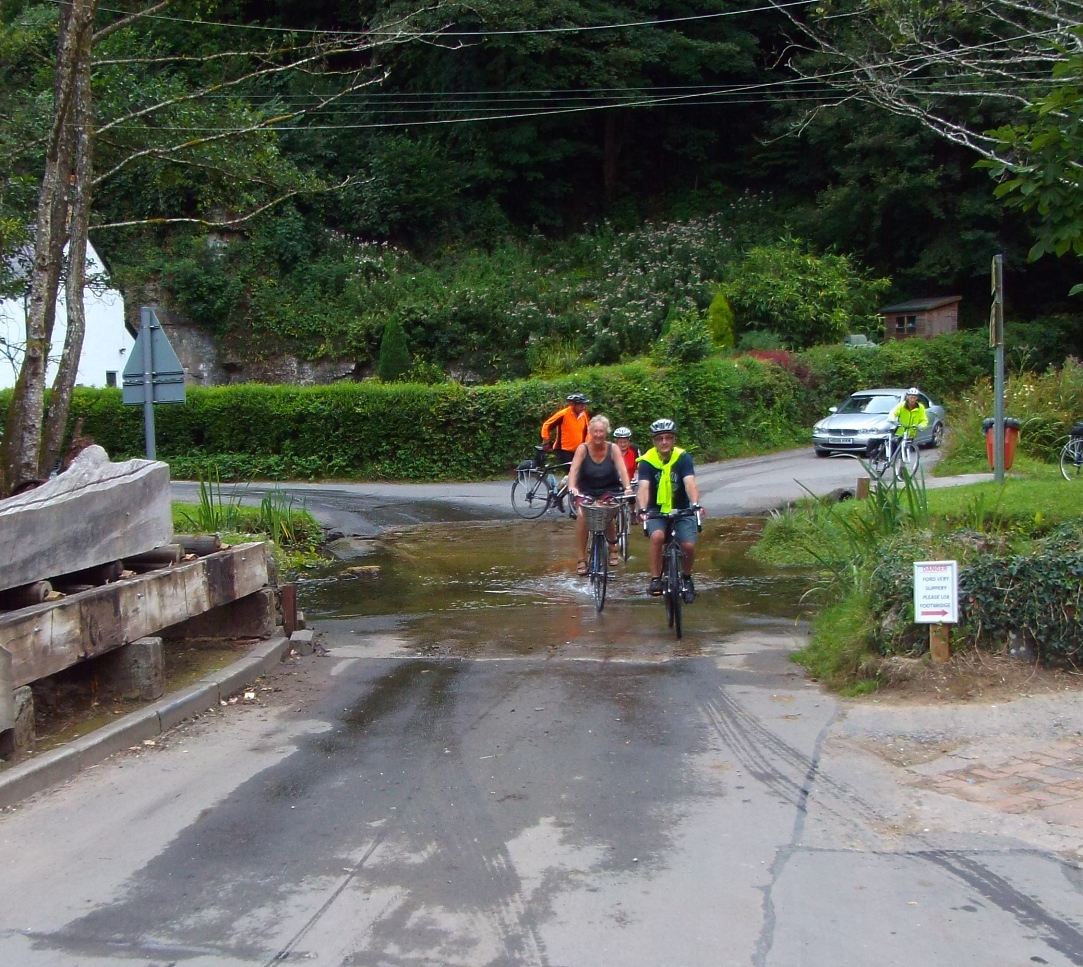 Ride 2 at the Llethrid end of Green Cwm. Cycling across the ford was not recommended!

We caught the tail end of hurricane Bertha. After heavy rain to wake us up it turned into a lovely day with excellent visibility and spendid seascapes.The two photos below were taken on Ride 7, the "Grand Gower Circuit". 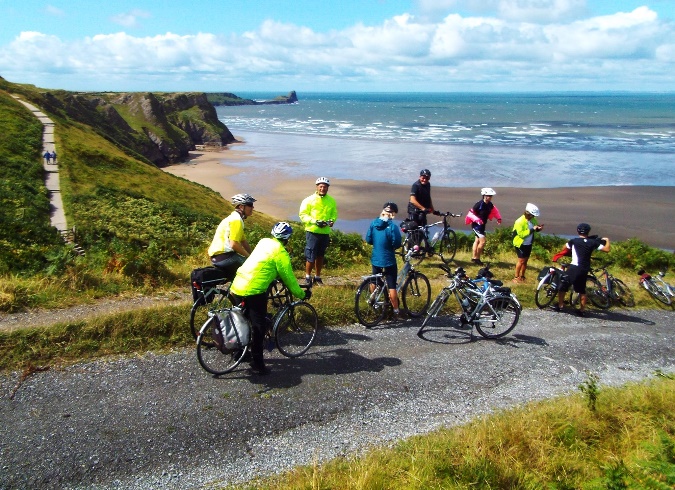 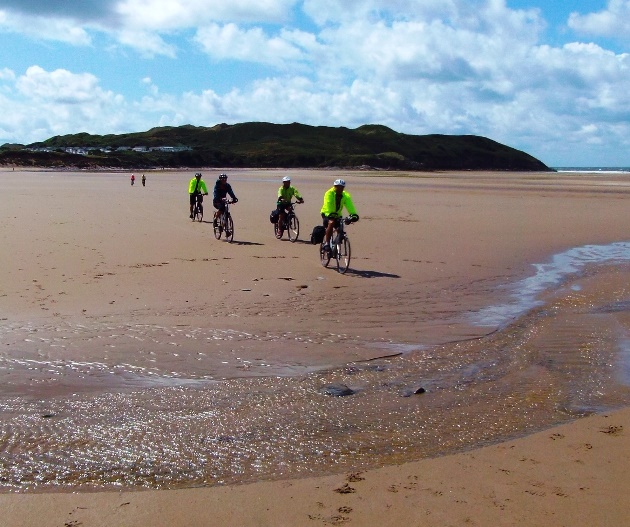 Dropping down to the path above Rhossili beach. Cycling across Broughton Bay.

An early shower, then fine. All three rides went as planned: Ride 7 up Swansea Valley to Pontardawe for a talk at the Riverside Centre about the local pottery history; Ride 8 to Kidwelly; and Ride 9 for a Folk Evening at the Loughor Boat Club. Five on Ride 8 had punctures - victims of hedge cutting near Kidwelly - and the leader found he had a slow puncture when he got home. The Folk evening ride had to take a longer (and hillier) route due to the normal route (NCR 4) being flooded by the highest high tide of the year.
(Unfortunately no pic.s!)

There were some fierce showers but on the ride/walk (Ride 10) we only caught the edge of a few of them. The pictures below show the group by the Three Cliffs Arch and crossing the stepping stones on our way back to our bikes. Before this walk we had lunch in the Three Cliffs café where, showing their support for the Festival, our drinks were complementary. (We had left our bikes at the café.) 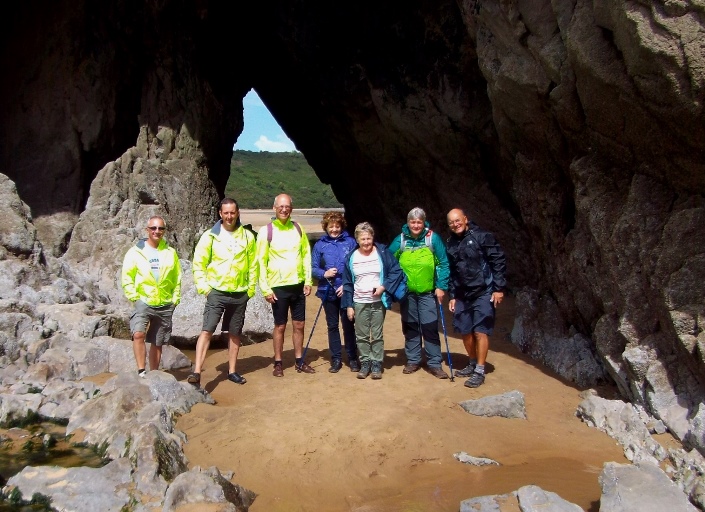 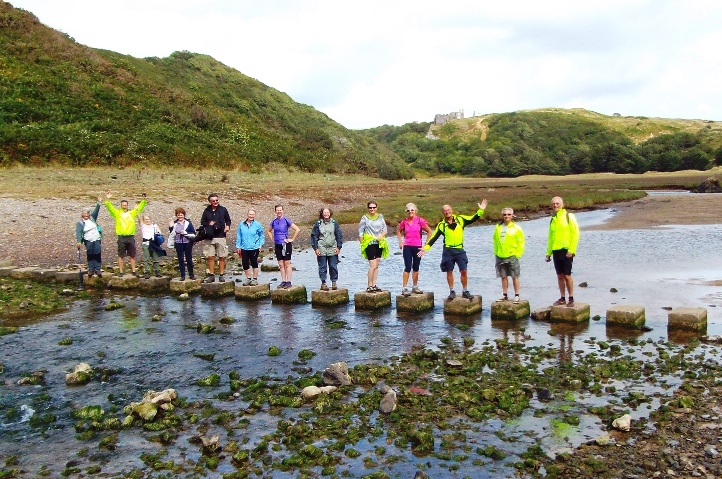 Fine and sunny - at least on the Gower Peninsular. Both the North Gower ride (Ride 12) and that to Henrhyd Falls (Ride 13) were well attended with 21 and 28 respectively taking part. A highlight of the former was the visit to the Bridges Pottery in Cheriton and of the latter the Falls. 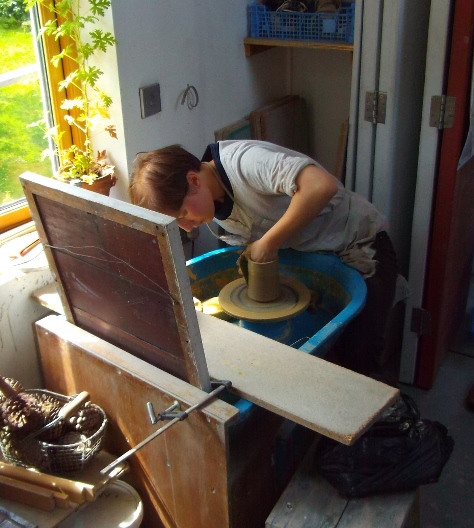 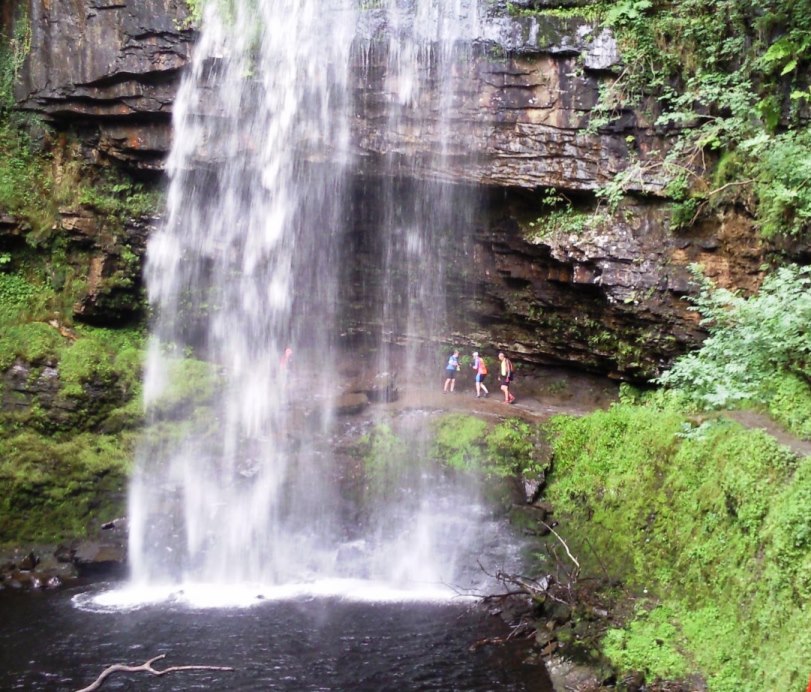 Micki's apprentice throws a pot for us. You could go behind the Falls (and get wet!).

There were some heavy thundery showers which we didn't entirely avoid. The Penclacwydd ride ended with a visit to Ddol Farm where, once again, we have to thank Colin and Hilary for tea and cake and for showing us their bees and grape vines. 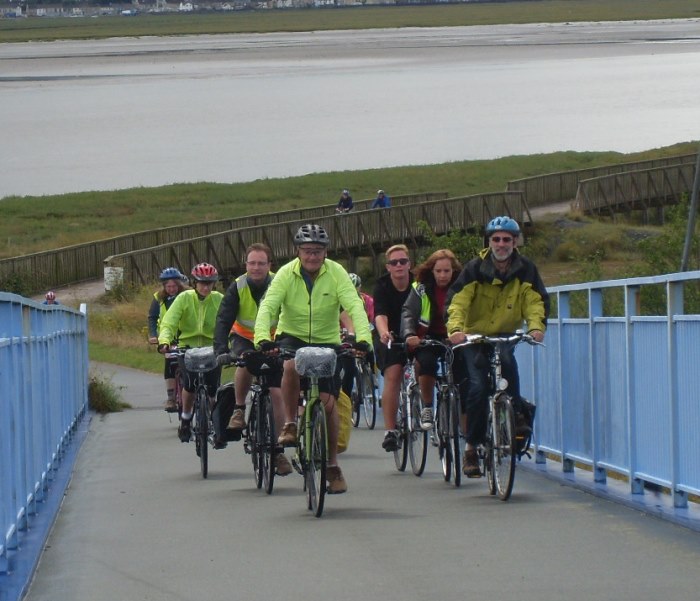 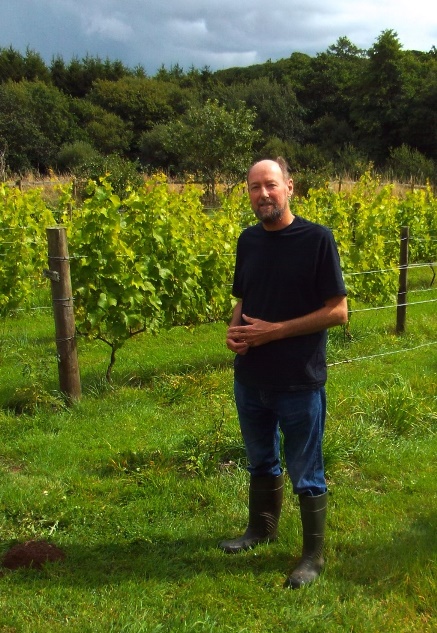 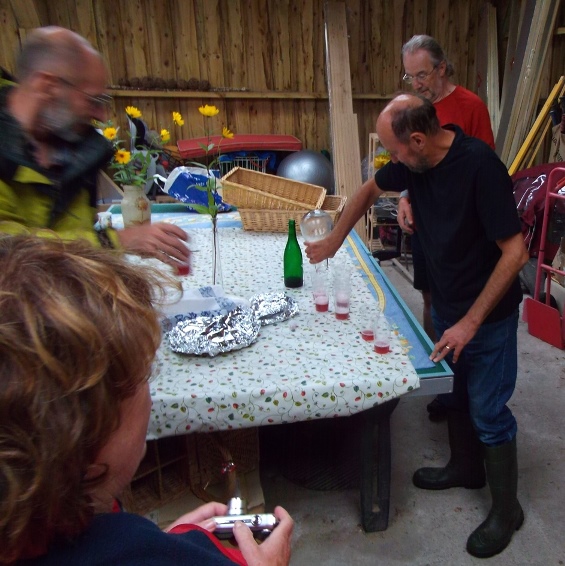 Crossing Bynea Bridge. Colin tells us about grapes. and lets us sample their produce.

A lovely day. The first picture features the Mumbles and Clyne ride (17), The second the Swiss Valley ride (18). 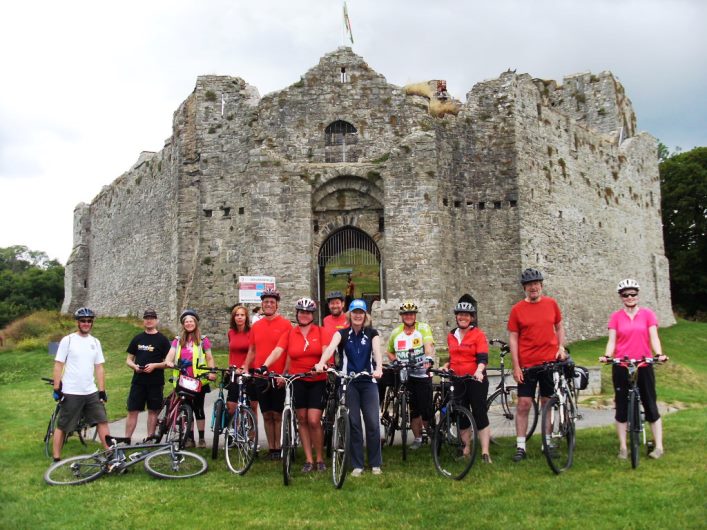 By Oystermouth Castle in Mumbles. 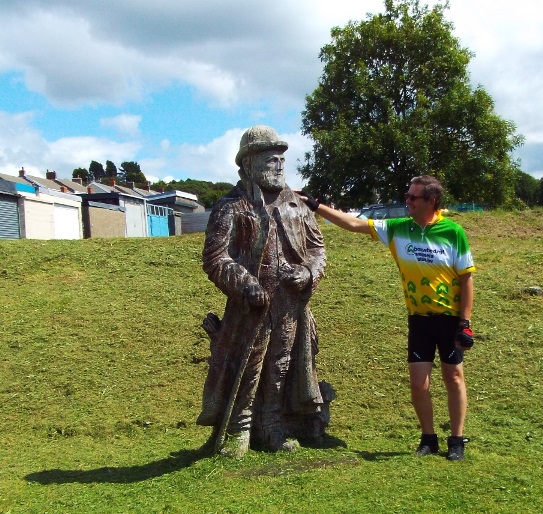 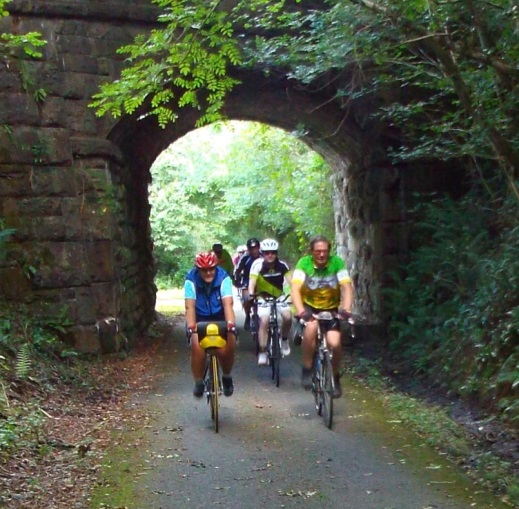 This gentleman in Tumble didn't say who he was! Ride 18 on the Swiss Valley path.

Fine again for the final three rides of the Festival. 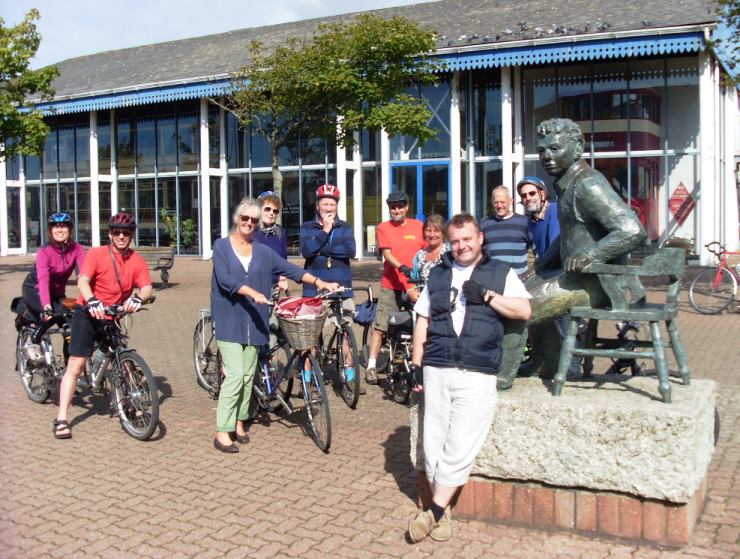 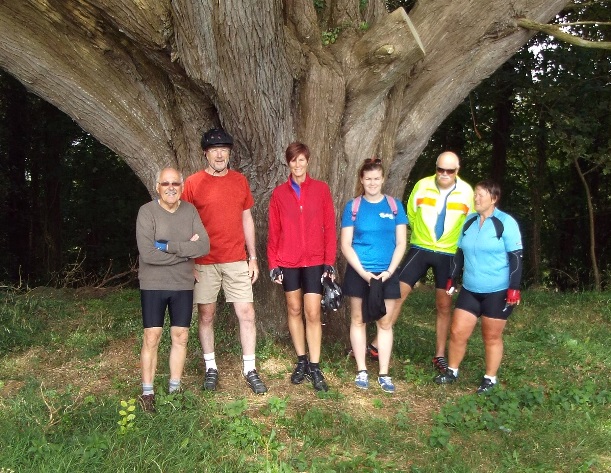