Some pictures
There were 22 rides (one of which was the Birthday Bash). These pictures illustrate a few of them. The ride numbers relate to the rides programme. This report provides statistics and recommendations for 2016.

It was a beautiful sunny, day. The launch took place at Blackpill. The group who had cycled from Paris to Swansea to raise funds for the Environment Centre arrived just in time for it. Byron Davies MP and councillor Mark Thomas having had to cancel, the Festival was launched by 'Badger' of the Wave radio programme. David Judd (Wheelrights President) said a few words and introduced him. David was to have flown in on the plane he had adapted to fit his bike but unfortunately he had recently had a crash landing and was injured. Despite this he arrived with, rather than in, his plane. 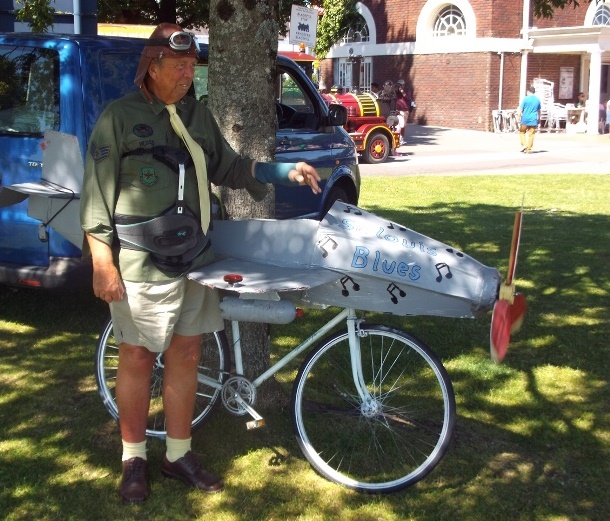 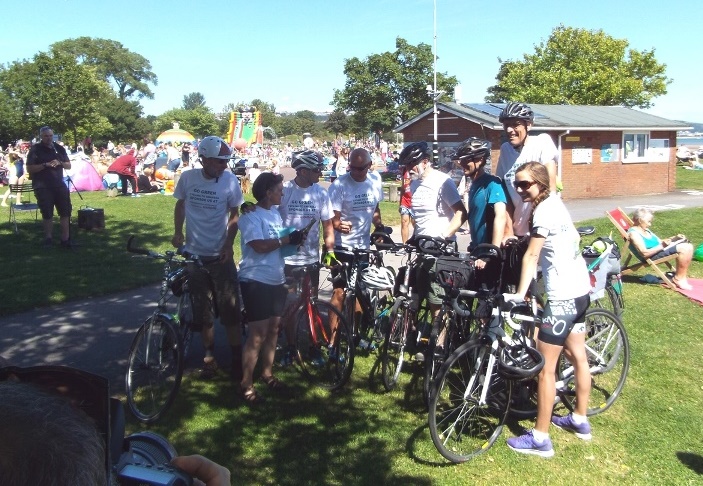 David Judd and his plane. Badger (left) and the Paris-Swansea riders. 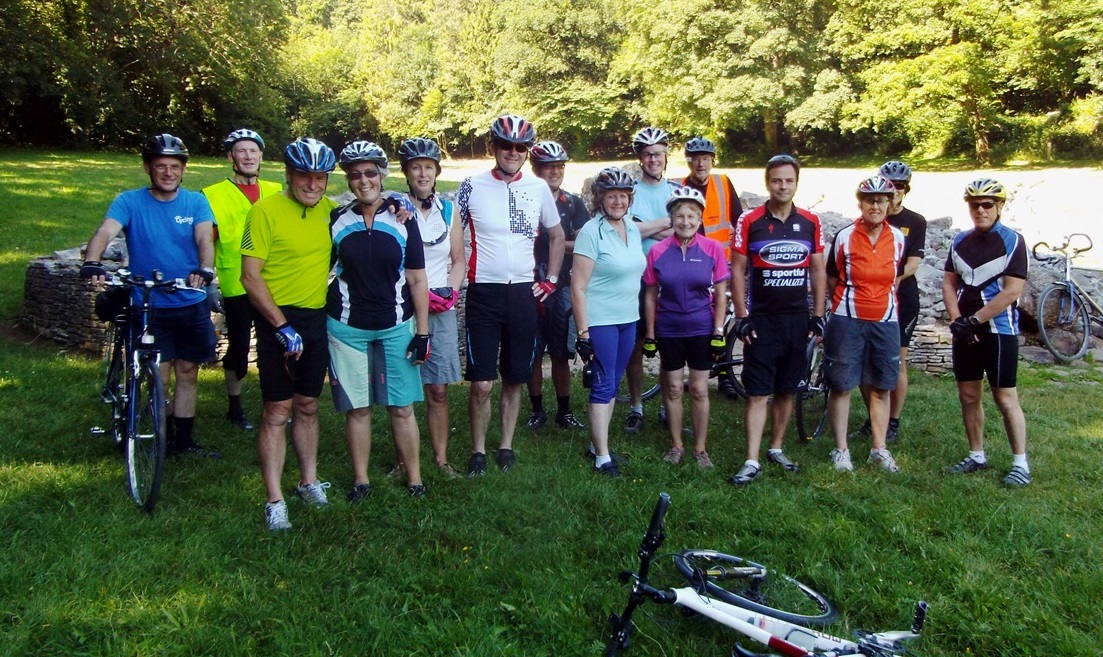 There was a little light rain - just enough to don rain tops (only to remove them). The picture below was taken on the 'Grand Gower Circuit' (Ride 6). 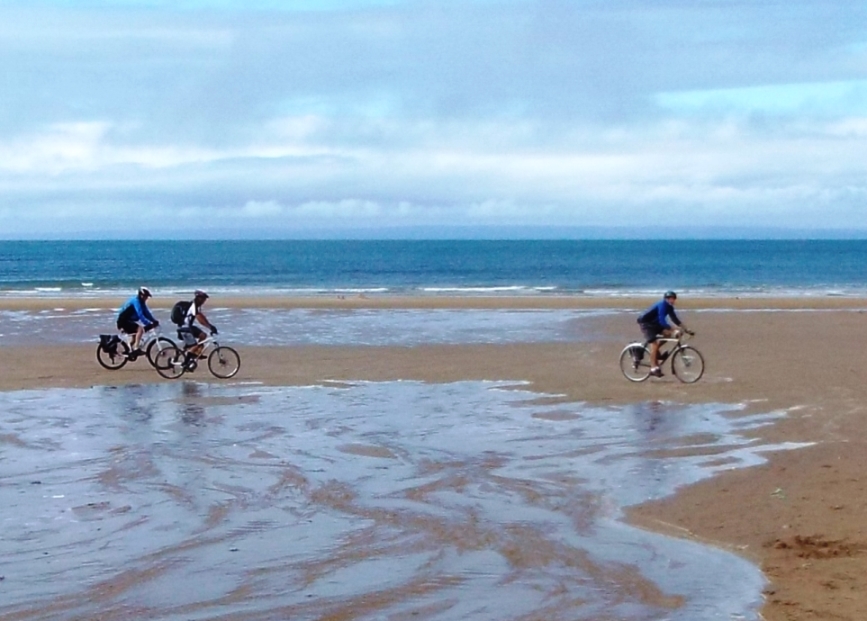 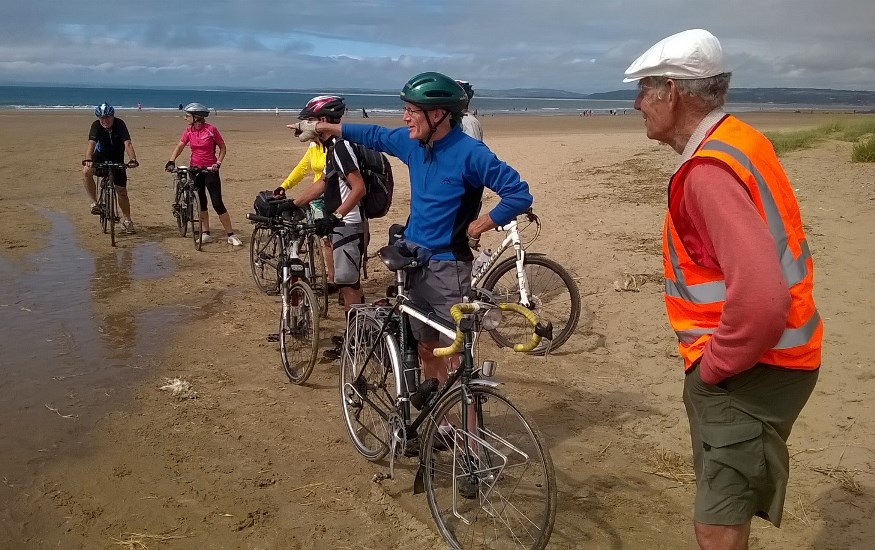 Crossing Broughton Bay. We could cycle most of it, if not all.

Early rain then, half an hour into the ride, it cleared giving way to warm sunshine. The picture below was taken on Ride 8 to Kidwelly. 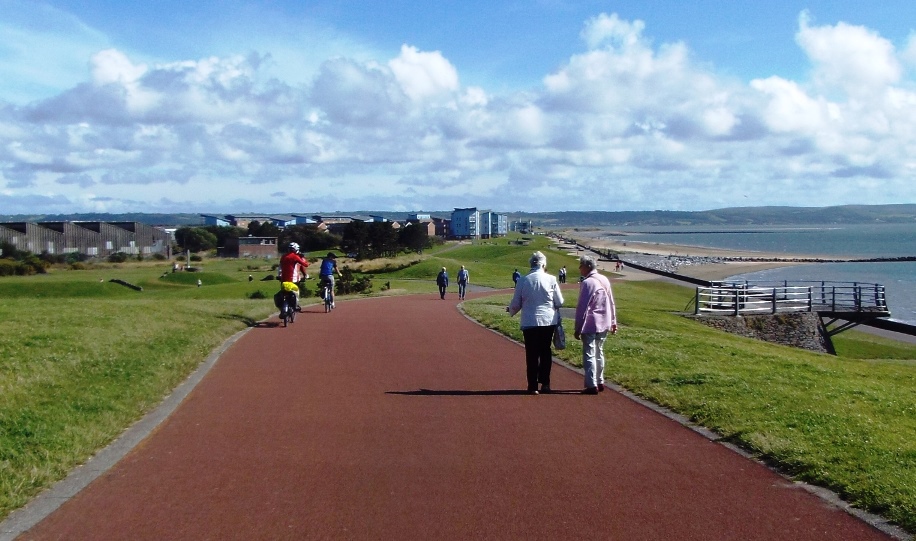 A lovely sunny day. Ride 11 (Pictured.) featured coffee and cake in the Community Café in Llanmadoc followed by a visit to the Bridge pottery in Cheriton and then lunch in the Greyhound in Oldwalls. The leader persuaded all 14 riders to take the short cut - with its magnificent views to the north - to Llanmadoc. 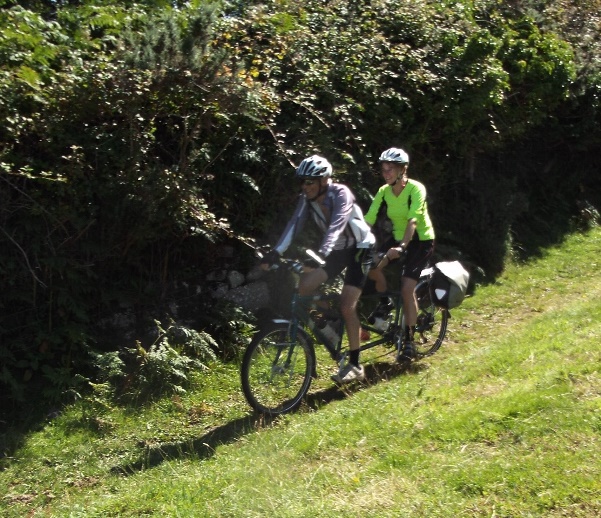 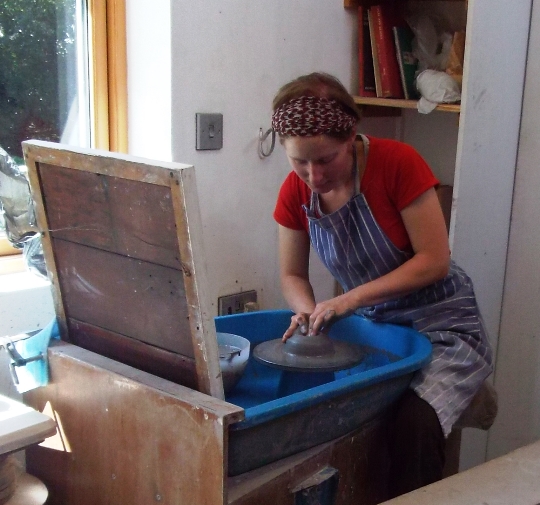 A tandem negotiates the short cut. Anna turns a pot for us.

Warm and sunny. Ride 12 comprised a tour of Mumbles finishing through the lovely Clyne Gardens. These two pictures were taken on it. 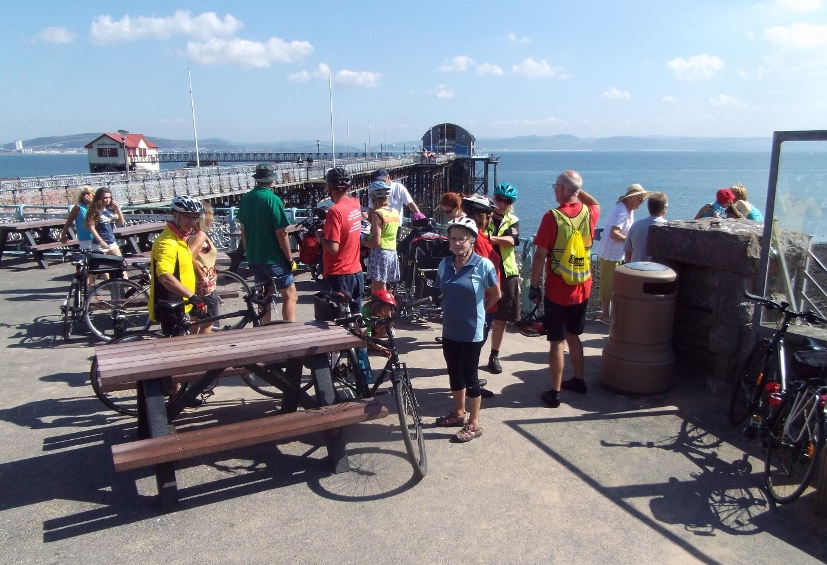 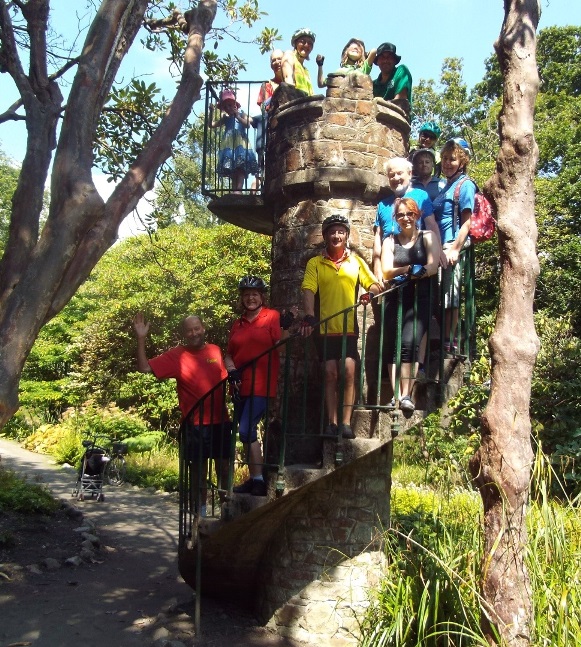 Rain was forecast but it held off until mid afternoon. The pictures below were taken on the family ride (No. 15) to the Gower Heritage Centre. There were activities for the children, compered by "Jim Juggler" who ended the visit with an impressive juggling display. Before this Roy Church led the party up into Green Cwm and told them all about the "Giants Grave" and Cat Hole. Both are important archeological sites, where even now there are new discoveries. 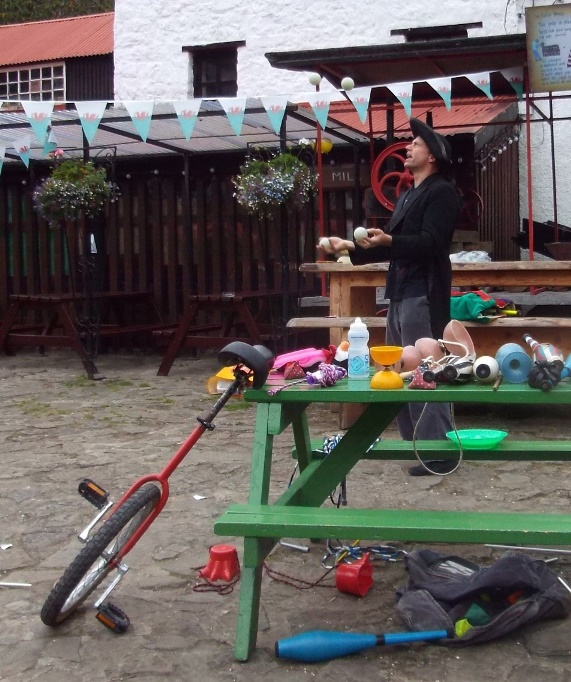 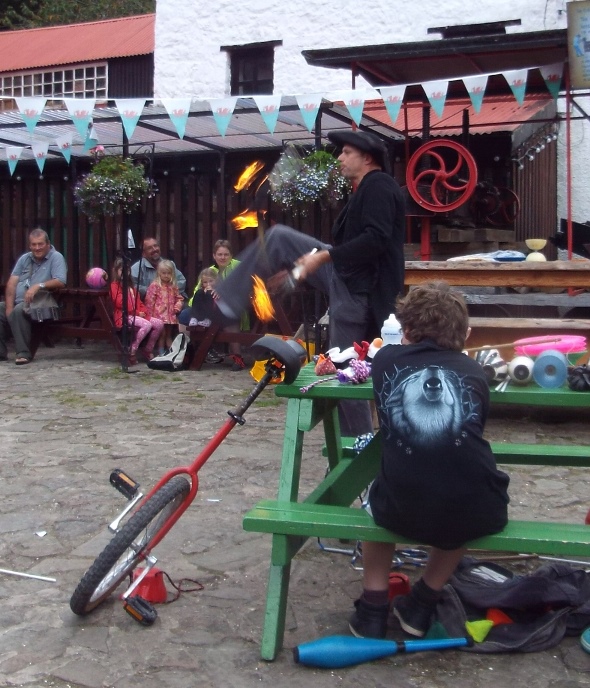 Jim could juggle up to 5 balls, not to mention playing with fire!

Lovely sunny day to end the Festival. Ride 20 was the ride/walk. 8 rode from the Dunvant RFC with a further 6 joining us at Southgate. Ride 22 started at the Sail Bridge from where they rode to Port Talbot and up the Afan Valley to Glyncorrwg. 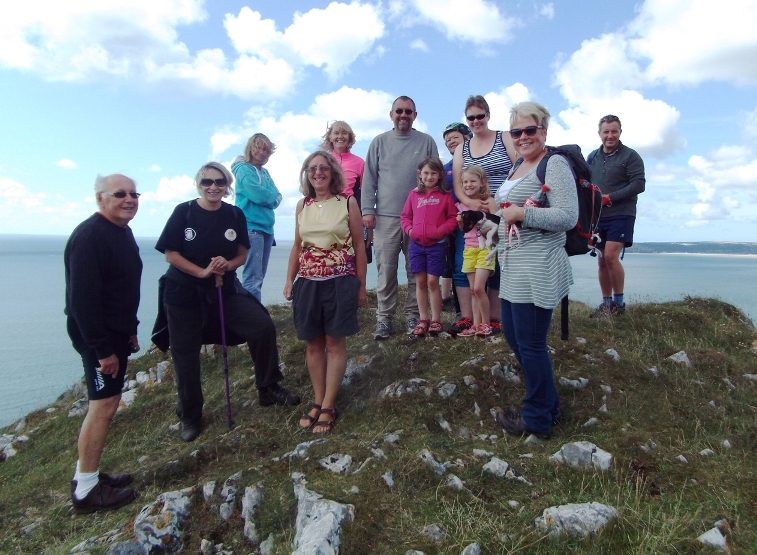 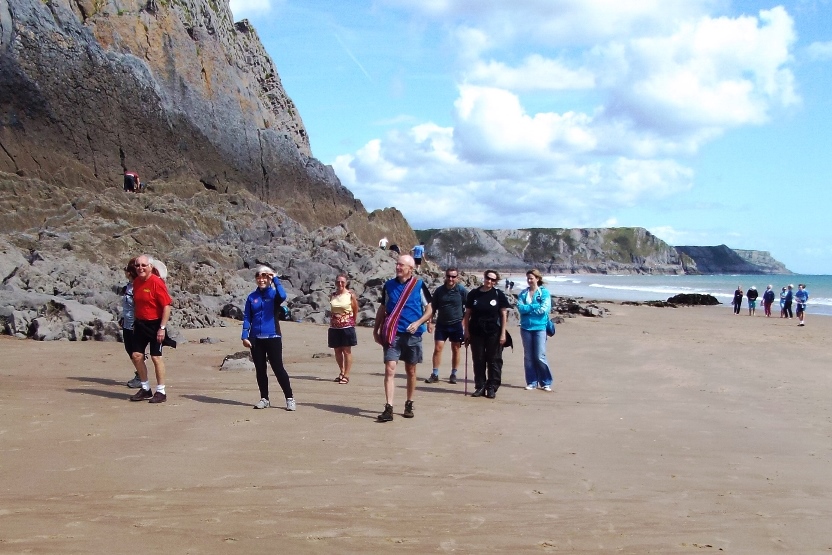 Ride 20 walkers on the East Cliff. Rounding Torr Head on the Ride 20 walk. 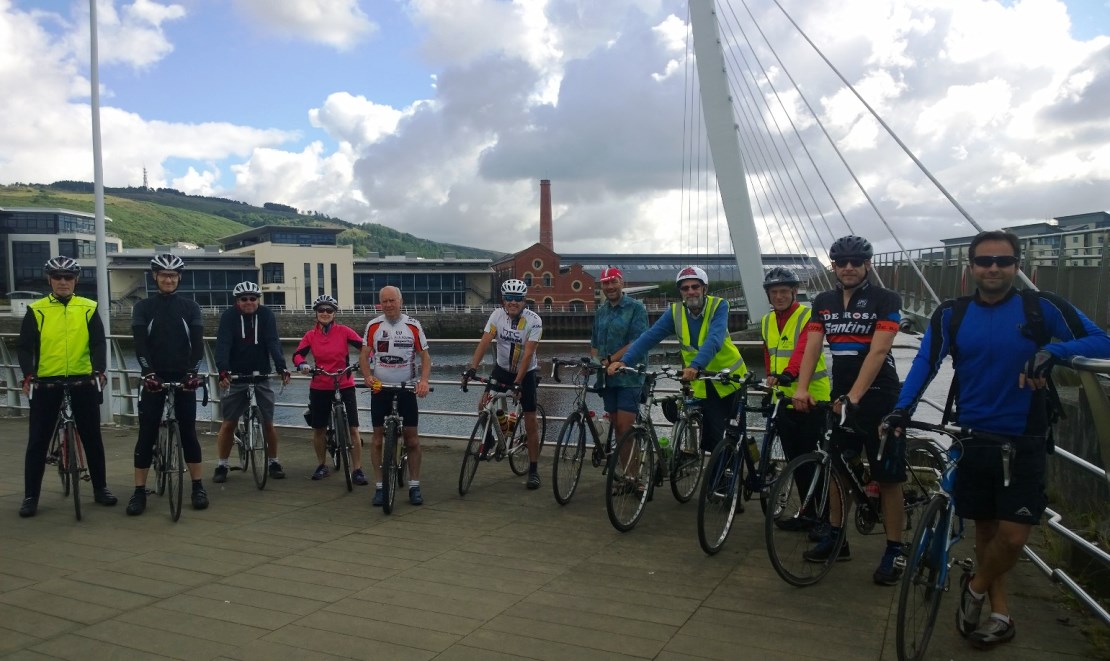 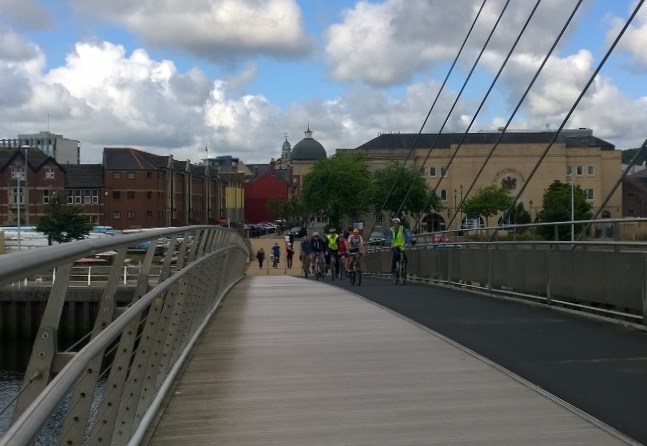 Ride 22 riders assemble by the Sail Bridge. and set off.