In July 2020 Wheelrights learnt that Swansea Council had been successful in obtaining funding to enable them to continue their provision of cycle routes in Swansea. Over £800k of this has been allocated for a major reconfiguration of Mayals Road. Details of this can be found on the Council's Active Travel web page. The work has already started and is scheduled for completion by the end of March 2021.

At a meeting on 14 November 2020, Wheelrights Routes Group passed the following motion about the Council’s proposed scheme:

Wheelrights agrees that a new bike route be constructed along Mayals Road to link the foreshore bike path with a future South Gower (GAP) route across Clyne Common. They agree with many of the Council`s plans, including Shared Use Paths (SUPs) at the bottom and top ends, and having raised platforms over minor junctions. However they oppose the current hybrid track plans.

This note gives reasons why the hybrid paths are unacceptable. Details of the deliberations can be found in the notes of the Routes Group meetings from 1 August onwards on the Newsletters/Notes page. These include a key meeting on 3 September when two Wheelrights members met with Alan Ferris, Swansea Council's officer reponsible for the design. Also relevant is a proposal for a link from the lower part of Mayals Road to the Blackpill Toucan crossing which Wheelrights prepared before they were aware of the Council's plans.

Subsequent developments: On 28 November 2020 Wheelrights Chair, John Sayce, emailed a proposal to Swansea Cabinet member Cllr Mark Thomas suggesting one of options 1-3 on this Wheelrights alternatives map. This was rejected by Alan Ferris. Following this David Naylor on behalf of Cycling UK emailed Alan Ferris a proposal for one or other of options 4 & 5. This South side only plan describes Option 5. (Option 4 is similar except that it involves a cycle track rather than a SUP.) No reply has been received. Subsequently DN came up with this variation. It makes off-road provision for inexperienced cyclists on the north side but in a different way to options 1-3. It could be added to the S. side plan later. It is currently being considered and has not been submitted to the Council.

On 1 February a meeting of residents was held on Zoom. It was decided to write to Swansea Councillors and this Letter was sent on 10th February.

Comments on this matter should be emailed either to David Naylor (david@davidjnaylor.plus.com) or to Dareyoush Rassi (d.rassi@swansea.ac.uk).

Wheelrights Routes Group are developing a network map. This is a tube style map, showing existing and planned cycle links between nodes. This network map is intended for Swansea Council to whom it will soon be submitted. It is subject to revision and comments on it should be emailed to Chris Walsh.

Alexandra Rd - Mansel St shared-use path.
This audit. proposes improvements to this path. (Since it was prepared the curvature at the entrance to Pleasant Street has been tightened.)
Westway.
This report covers an inspection of Westway by the Routes Group on 4 February 2017.
Blackpill Crossing.
This paper. is a short technical note which shows how the lights could be phased to mimimise delay at this crossing for all users: motorists, cyclists and pedestrians. (The lights at this crossing were changed in 2017. Although the wait time for cyclists and pedestrians has been reduced the recommendations in the paper were not incorporated.)

Since Wheelrights first looked into cycle routes in this area in 2009 NCR 4 has been moved north of Elba Crescent to follow the new road further north, and the dead end cycle path (The original intended NCR 4) has been extended alongside the Tennant Canal to Jersey Marine. Also NCR 4 where it runs along the north side of Fabian Way west of Elba Crescent has been upgraded. This section is now part of a cycle route to the Bay Campus.
In addition to resolving the safety issue by Baldwin's Bridge covered above we have two main proposals to improve cycle provision along this corridor.
Northern route.
Simply upgrade the gravel to tarmac for the remaining threequarters of a mile of the existing route along the Tennant Canal to Jersey Marine.
Southern route.
This would be entirely south of Fabian Way and would provide a route east from the Bay Campus to link with NCR 4 where it emerges from the underpass near the Briton Ferry Bridge. This proposal shows it.

Partly due to pressure from Sustrans to improve the signing on the NCN in Swansea County and also because this was on the agenda of both Wheelrights and the Council the local Sustrans Rangers carried out a signing audit in the autumn of 2010. Its main purpose was to identify locations for fingerpost destination signs which in most cases will replace the Sustrans stick-on signs.
The audit was presented in three reports which include recommendations. Drafts as follows (pdf files) were prepared in October 2010.
NCN 4: Loughor Bridge to Blackpill;
NCN 4: Blackpill to County E. boundary;
NCN 43: Swansea to Clydach.
In the latter part of 2011 these two draft reports were revised to cover just the signing as follows.
NCN 4: signing - Loughor Bridge to Blackpill; NCN 4: signing - Blackpill to County E. boundary.

The danger to cyclists using NCN 4 to pass this roundabout, especially to the east bound, featured on this page soon after it was opened in the Spring of 2008. Wheelrights then prepared a one page report (April 2008 report) to draw attention to this danger. This was sent to Neath Port Talbot County Council with the request that appropriate action be taken. Nothing was done.
Early in the summer of 2009 Wheelrights received e-mails from cyclists expressing concern about the junction. This prompted us to raise the matter again with NPT. The response was not satisfactory: apparently not a problem because the design had had three safety audits. We then (July 2009) produced our one page safety assessment. It is similar to the April 2008 one but goes into greater detail about the nature of the danger, not only around the junction but also at the entrance to the Shell filling station forecourt immediately to the east.
In due course warning markings were added on the path surface at the approach to the crossings. Also an alternative route to the NW which avoided three of the five junctions was added. But because it is longer it appears to be little used. 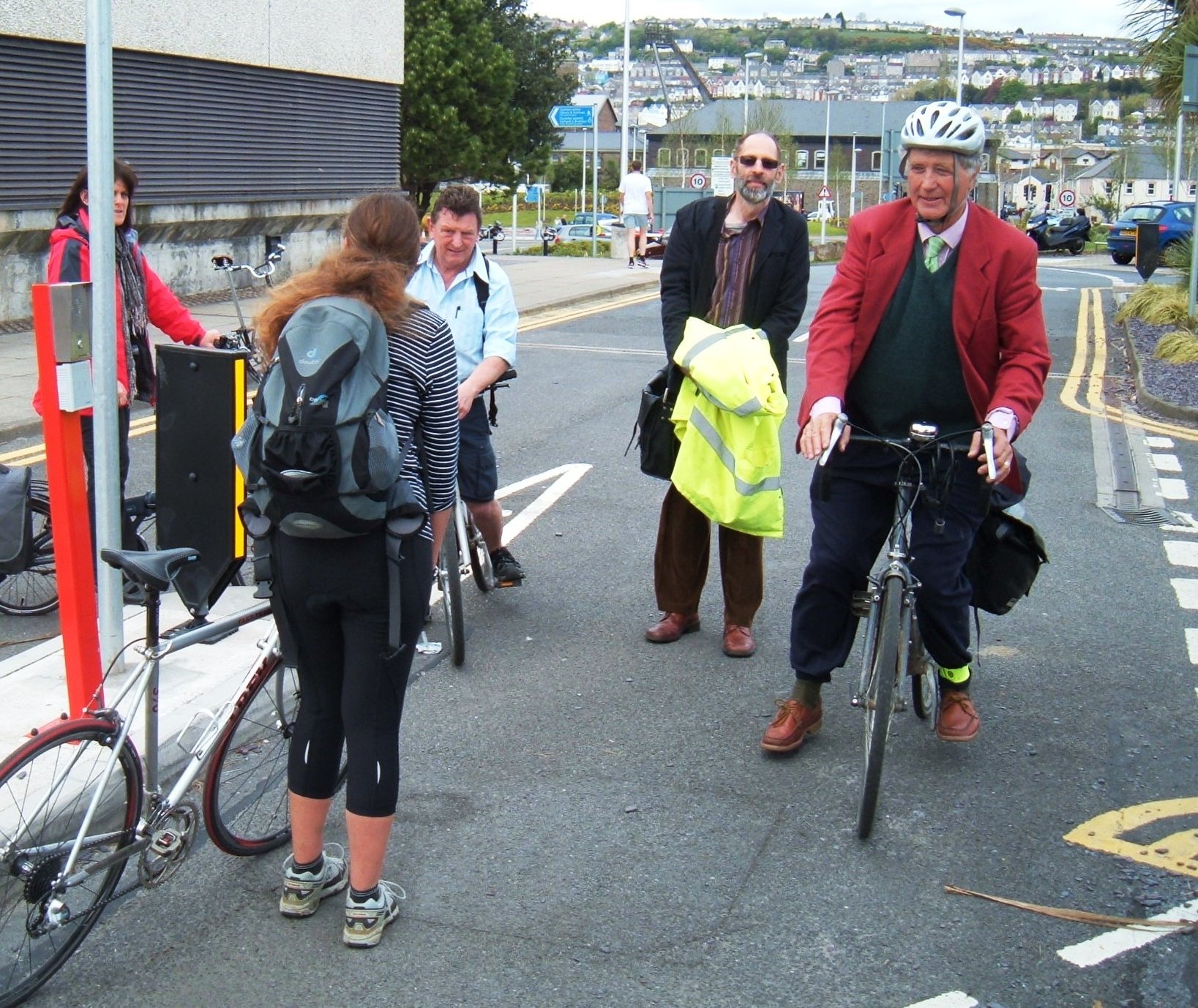 In 2009 Mr Grimshaw, Sustrans founder and President, came to Swansea twice: first for two days in April for meetings with Wheelrights and Swansea Council and then on 19 October to give a Seminar to Council Officers.
John Grimshaw's visit is an account of the first visit. The photo, taken on 29 April 2009, shows a group of us from Wheelrights outside the Civic Centre. John Grimshaw is on the right. On that day we were interviewed by the Evening Post and an article appeared the next day. To view this click Evening Post article.
Grimshaw Seminar provides a 9 page (5 MB pdf file) summary of his Seminar.