To help us to better serve our members we have prepared a questionnaire which we ask you to complete. There are three ways to access it:

This map showing Wheelrights first thoughts on INM Swansea cycle routes, was submitted in September 2017. (Note that the routes are on p.2.) See the INM section on the Infrastructure page.

These were submitted in March 2017. This is Wheelrights and this Cycling UK's submission.

This map shows potential cycle routes in Swansea. It was submitted for inclusion in the LDP in August 2016.

Underlying the visit of Ben Hamilton-Bailey in January was the message that the Council should provide space for cycling in Swansea. This CTC video indicates what is needed, as do also the Poynton and New York videos in the "Models to follow" section on the Infrastructure page.

Click Wheelrights, Carmarthen Cycle Group or Sustrans for the responses of these groups (in the autumn of 2014) to the invitation to consult on this plan.

Wheelrights have responded to the various consultation opportunities; most recently in August this year when it was in force, ie the Bill had become an Act. Three documents, prepared by David Judd, were then submitted: Response 1, Response 2 and Response 3
On 2 April 2013 we responded to the draft Bill and before that on 9 May 2012 to the White Paper. The Active Travel Bill consultation and the White Paper consultation are our respective responses. This link is to the Act and associated Explanatory Memo (in the table under "Documents") and here is the original White Paper.
Our response echoes those of the CTC and Sustrans in that we strongly support the objectives of the Bill, namely to get people out of their cars. We welcomed the various measures proposed to facilitate this but pointed out the need for the document to be more specific in some areas - eg to not always bracket cyclists and walkers - and to clarify sources of funding. We like the principle that funding should be linked to how effective proposed measures would be in facilitating active travel. However we were concerned that the draft Bill was much weaker than the White Paper it was meant to enable and in our second consultation we asked for the Bill to be brought in line with the White Paper.

As early as 2013 Wheelrights lobbied for more space on the Hitachi trains, which (since late 2017) ply between Paddington and Swansea. Regrettably our recommendations were ignored and although the longer (10 carriage) trains can take 8 bikes, compared with 6 on the 125s they replace, the storage, in pairs in pokey 'wardrobes', is difficult to use and for the most part hard to find for lack of bike signs.
In 2013 and again in 2017 we lobbied Arriva Trains Wales (ATW), but no additional provision was provided. It remains to be seen whether Transport for Wales, who have taken over the Franchise from ATW, will do better. The 18 page report: Bikes on Trains, kindly sent to us by Sustrans and sent to ATW, provides a useful reference for good (and bad) practice for bike provision.

With the local elections coming up in May 2012 we have drafted a Manifesto. It takes the form of a letter to send to candidates. This invites them to pledge their support to the following four objectives: Here is a pdf of the letter should you wish to view it or send it to a candidate.

Wheelrights, in collaboration with Swansea's Cycling Officer, have prepared a sort of mini-highway code to encourage cyclists, pedestrians and other users of the Swansea Bay path to respect each other. It is particularly aimed at kids and uses as a theme the old Mumbles steam train on which a boy with a bell warned pedestrians of the approach of the train. The code is in the form of an A5 poster with a picture of the train and a poem on one side with the code on the back. To view/download it click Shared path code. It is intended for distribution at appropriate events. Copies can be obtained from the Cycling Officer. Enquire at the Civic Centre.

Change4Life provides information about this National organisation which should be of interest to Wheelrights members and indeed to anybody seeking advice on how to benefit from a more active life style. Of particular interest to us is Bike4Life. This is a colourful 16 page downloadable document which provides a wealth of information to help you get cycling, including useful links.

Two events organised by Wheelrights in the June 2011 Bike Week are of particular note. (The description of the mass ride below applies almost equally to its repeat on 15 June 2013.) 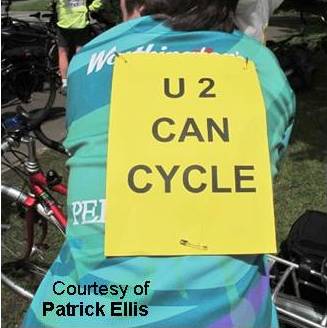 Passing motorists
could read this.
Some 25 cyclists assembled at Blackpill on 18 June for a mass ride through Swansea City Centre to sell the idea of the bicycle as an alternative to the car, and to highlight the other benefits of cycling: health, fun, etc. We were pleased that Byron Davies, the local Conservative AM and shadow Transport Minister joined the ride and said a few words of encouragement when we reached Castle Square.

The pelaton is heading east
on Mumbles Road. 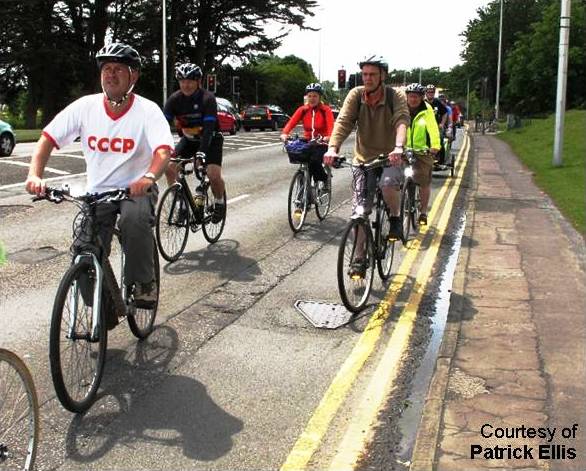 Six different types of "commuter" set off at 8.15am precisely on 22 June from the car park near the Commercial in Gowerton to travel to Castle Square. Three were on bicycles, one on a kick-bike, one each travelling by car, bus and train, and two on foot - runners. The object was to compare the times taken. The event was great success. The sun shone. Geoff and Veronica Wood were in Castle Square to check the challengers in and record their times. An Evening Post photographer was there together with Chris Peregrine of that newspaper who interviewed the challengers and produced a comprehensive report of the event in the 24 June edition. 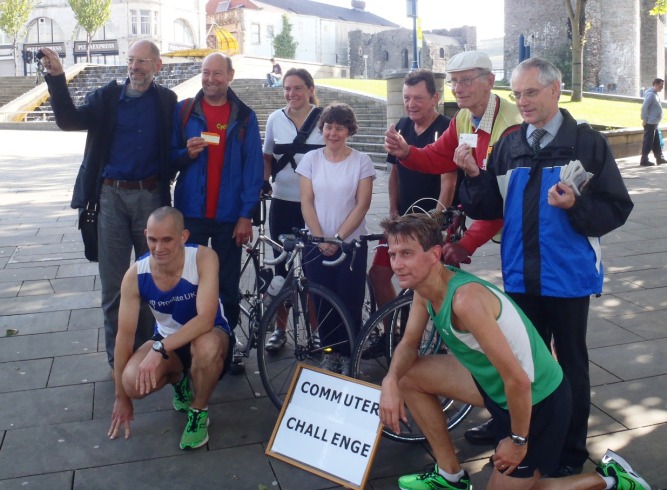 The picture below shows Chris trying out Rob's kick bike in Castle Square. The times taken by the challengers starting with the first home are as follows. 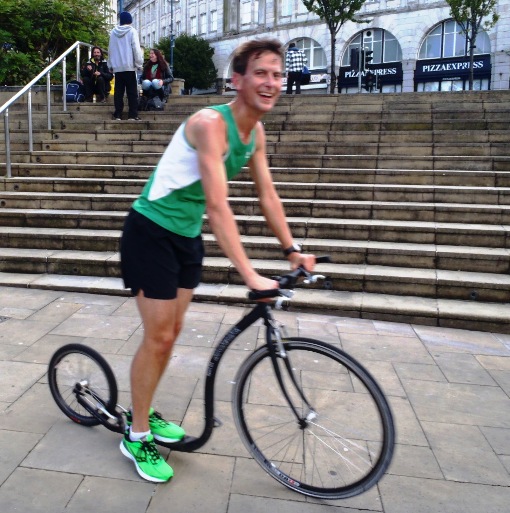 Some qualifications are needed in comparing these times. Apart from the car and the train the challengers were free to choose their own route. All except David chose direct routes between 5 and 6 miles which because of Swansea's topography were far from flat. David followed NCR 4 down the Clyne Valley and round the coast thereby avoiding the hills but adding 2 miles to the journey. Colin's 40 min. train journey should have perhaps 10 minutes knocked off it to make the comparison fair as its scheduled departure from Gowerton was 21 minutes after the start time. He did however take a bike with him thus saving time at the finish. Mike's bus journey on the other hand was completely fair as the scheduled departure time was only 2 minutes after the start. But unlike the train the bus was late.

What stands out is the clear message which this challenge conveys: self powered transport - in particular the bicycle - is quicker in the rush hour than powered transport. It is of course cheaper and has the other advantages of providing exercise, relieving stress and reducing CO2 emissions.